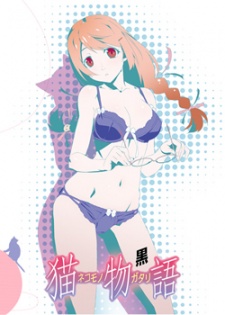 The first season of the Monogatari Series, part 3/3. Contains the arc Tsubasa Family from the Nekomonogatari: Kuro light novel. Spring break is over, but Golden Week is here. When Koyomi Araragi runs into his friend and savior Tsubasa Hanekawa, he notices something is off. Even though Hanekawa is clearly wearing a bandage on her face, she insists that it is no cause for concern. Later, when the two encounter a dead white cat and bury the body, they unknowingly trigger another supernatural event. Hanekawa becomes possessed by the demonic spirit of the cat, and goes on a violent rampage across town. It's now up to Araragi to save the girl who saved him, all the while figuring out if his passionate feelings toward her maybe love after all. (Source: AniList Written by Edo [edited])